Could not retrieve the oEmbed resource.

Led by Glaucoma Australia’s CEO Ms Annie Gibbins, the symposium attracted a large number of glaucoma patients, many of whom were already well informed judging by the conversations and questions that ensued. 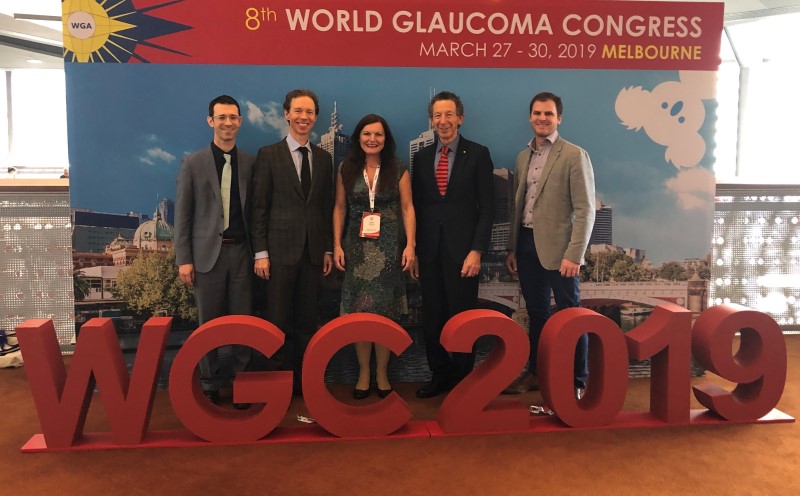 One of the main attractions was the address by Professor Ivan Goldberg whose involvement with GA & glaucoma patients spans many years. His communications skills are well known and a significant draw card. He has appointments at Sydney Eye Hospital and is a past head of various glaucoma societies both locally and overseas.

He confirmed to the audience that glaucoma was still the most common cause of preventable blindness, is a progressive disease that gave no warning of its presence until moderately advanced, treatments are usually effective, requires life-long management, and compliance remains the biggest problem. 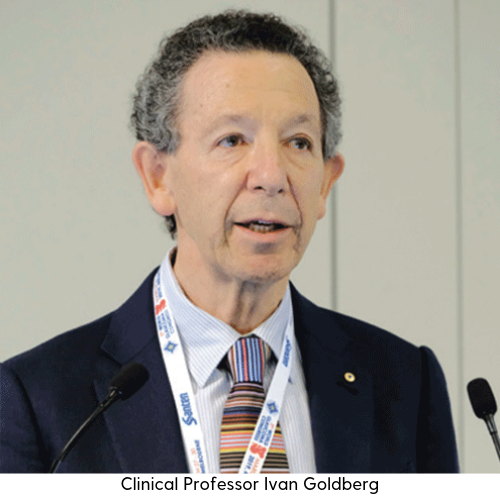 Detailing the effects of the disease, he targeted retinal ganglion cells (RGCs), noting that by the age of 50, some 250,000 of the normal population of around 1.2 million RGC were “gone” in non-glaucomatous people. When glaucoma is diagnosed, one aim of treatment is to slow the rate of glaucoma-accelerated RGC loss so that it approximates the normal loss rate.

He described glaucoma as a condition that “erodes” nerves and increases the depth of the cupping of the Optic nerve head Optic Nerve Head (ONH). He confirmed that the disliked visual field testing is still the main test of retinal function. In his view, there is a need for an alliance between the patient and the practitioner, and a patient-centric approach was one of the best ways of achieving it.

Clinical Associate Professor Paul Healey, who holds positions at USyd and in private practice, followed Goldberg. His presentation was titled Lab Based Research. He gave genetics as possibly the most common cause of glaucoma and nominated it as being one of the most inherited diseases, making lifestyle largely irrelevant. He floated questions about whether it is possible to identify those susceptible, whether genes be manipulated beneficially, and even if those things were possible, can we afford to do it as a society.

In some cases, genes with small variations can be associated with glaucoma. However, in a 1997 paper that had Professor David Mackey (CERA, later Lions Eye Institute, Perth) as a co-author, a gene that causes POAG was identified but could only explain about 3.9% of cases. To date, some 12 genes have been implicated in glaucoma’s aetiology, but almost 57% of people with those genes do not have glaucoma, suggesting the situation is more complicated than first thought. One suggestion is a combination of genes is required to result in disease.

Can genes be manipulated? Healey noted that gene therapy, a 1977 idea, was a way of altering a disease pathway beneficially, often using a viral ‘Trojan horse’ to get the genes required into the eye. He gave the gene therapy strategies as: the introduction of a missing gene (haplosufficiency), preventing the ongoing activity of an undesired gene (gene silencing), and improving the local gene environment (gene modulation).

According to Healey, some genes increase neuron susceptibility, while in other cases there are more genes present than needed. He saw potential for geno-pharmaceuticals made in the patient’s eye, expecting that lower dosages would be required alongside fewer side-effects. All stages of a disease pathway can be affected: gene creation, their effects, and the gene regulators. Those proposed treatment possibilities amount to personalised medicine.

Another approach that is the subject of much research is that of neuroprotection – how functioning RGCs and neurons can be protected from deleterious processes in disease. In glaucoma, BDNF transport is impeded and, in animal studies at least, about 90% of the damage can be reduced by treatment. Already, a Japanese pharmaceutical company has acquired the IP rights to the research.

Are such treatments likely to be affordable? Healey believes so, based on the expectation that mass production will lead to cheaper and quicker techniques being developed. Importantly, he pointed out that there were no ongoing treatment costs incurred. In his view, we cannot afford not to do it. He described gene therapy as 21st century pharma. He did not hold out much hope for routine genetic testing because of the ‘who’ and ‘when’ factors which, when added to the rare ability to correct any diseases identified, makes the whole idea less attractive.

Dr Simon Skalicky from the Royal Victorian Eye and Ear Hospital and a federal GA councillor, gave an overview of clinical advances in glaucoma. To the lay audience, he described glaucoma as a progressive, irreversible disease of the optic nerve. Clinically, glaucoma management involves measurement of the IOP, assessment of the visual fields looking for losses, and viewing of the optic nerve head. Treatment was a lowering of IOP if it is elevated via medication, laser, or surgery. He told the audience that monitoring, including with OCT, was just as important as treatment.

He mentioned iStent implantation (bypasses the trabecular meshwork, the stent’s head is located in Schlemm’s canal) at the time of cataract surgery and the XEN Gel Implant (non-biodegradable, gelatin, in the sub-conjunctival space) as examples of a MIGS approach to treatment. Where medications are used, the use of preservative-free options was advised.

He equated early detection with sight saved, and described SLT as both a means of increasing the drainage pathway and a way of stimulating the cells of the trabecular meshwork. He described the implantation of two iStents as being the functional equivalent of one type of glaucoma eyedrop. Implanted iStents will at least reduce the need for eyedrops, even if they do not eliminate it completely. The XEN Implant is used in unstable glaucoma cases. Sometimes it is necessary to use a combination of therapies. 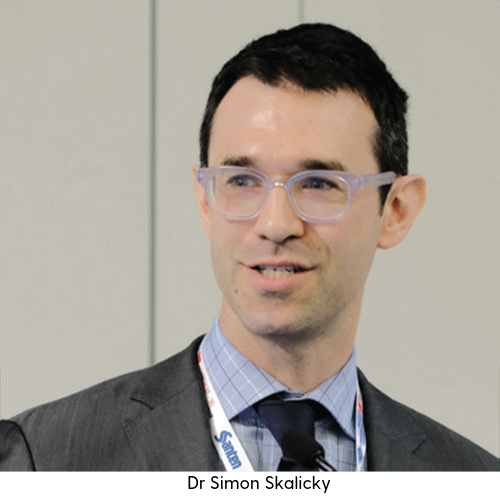 The floor was then handed over to a glaucoma patient to relay their personal experiences and give their perspective. Mr Christopher Grikscheit has had his glaucoma diagnosed for 12 years, and reported slower visual perception, decreased-contrast vision, problems with computer screens, and bumping into things. He has magnifying glasses distributed throughout his home. He experiences good days and bad days visually, and appreciates the wealth of glaucoma information available online. In his view, glaucoma management is the patient’s responsibility and good communications between the relevant optometrist and ophthalmologist is essential.

GA’s CEO Ms Annie Gibbins then delivered an overview of what support GA was able to provide to patients. Worldwide, glaucoma will affect 79 million people by 2020. In Australia, there are estimated to be 18,000 people who are either blind or severely vision impaired as a result of their glaucoma. There are estimated to be about 300,000 living with glaucoma, some 150,000 of which are unaware or undiagnosed. Surveys suggest that 90% of Australians rate sight as their most valued sense, with some 60% claiming that vision loss is worse than a heart attack or the loss of a limb.

GA offers appropriate referrals, free educational materials, and patient support. Those materials emphasise the risk factors: elevated IOP, being of Asian or African descent, being diabetic, some refractive errors, and being over 50 years of age. She likened GA to being the side-kick to the professionals on the glaucoma referral and treatment pathway.

She itemised the four stages of the glaucoma journey as: suspected diagnosis, confirmed diagnosis, adherence with prescribed treatment (often with the help of family, partners, and carers), and finally, living with glaucoma. Some 23-56% of sufferers have a family history of the disease. As is well documented, only 36-50% of sufferers are fully compliant with prescribed treatment 12 months after a glaucoma diagnosis.

Mr Grant Wilson from Vision Australia provided some insight into the difficulties experienced by glaucoma sufferers. Going back 30 years, he described their job prospects as being piano tuners and switchboard operators. Now with smartphones, apps, GPS devices and soundscape technology it is possible to travel and retrace steps in relative safety. Visual aids targeting factors like glare reduction, suitable lighting, and shading also help.

The ubiquitous personal computer in all its guises has decreased both the need for visual aids and the importance of CCTV-based magnifying devices. Text-to-voice scanning technology such as the OrCam MyEye2, a spectacle-mounted aid, has also played a part. Other aids include QR code scanning, people-recognition systems (from tagged photos), and Aira, a network of trained professional agents to whom the blind or vision impaired can connect with to be informed of what they are ‘looking’ at, what’s in front of them, and details of their immediate environment.

Other possibilities include IrisVision, a wearable device with powerful magnification capabilities, especially at distance, and personal digital assistants such as Google Home, Amazon Alexa, Windows Speech Recognition, and Apple Siri. With all the help available now, it is possible for the blind and vision impaired to undertake or continue full professional careers that were denied to earlier generations.